I am a born Daydreamer. Growing up an avid reader helped spur my imagination. From Theatre to design, it has always been my dream to create. Whether in my hobbies or my professional life, I have incorporated my creativity into all I do. A former Drama Therapist turned Investigative Designer, I explore ways to weave stories and visual connections into my designs bringing them to life.

I continue to develop my skills in four main areas: branding, motion design, graphic design, and coding. With a background in Psychology, research is imperative. Feeding my naturally inquisitive nature, I love to identify new methods and explore unique approaches for projects. 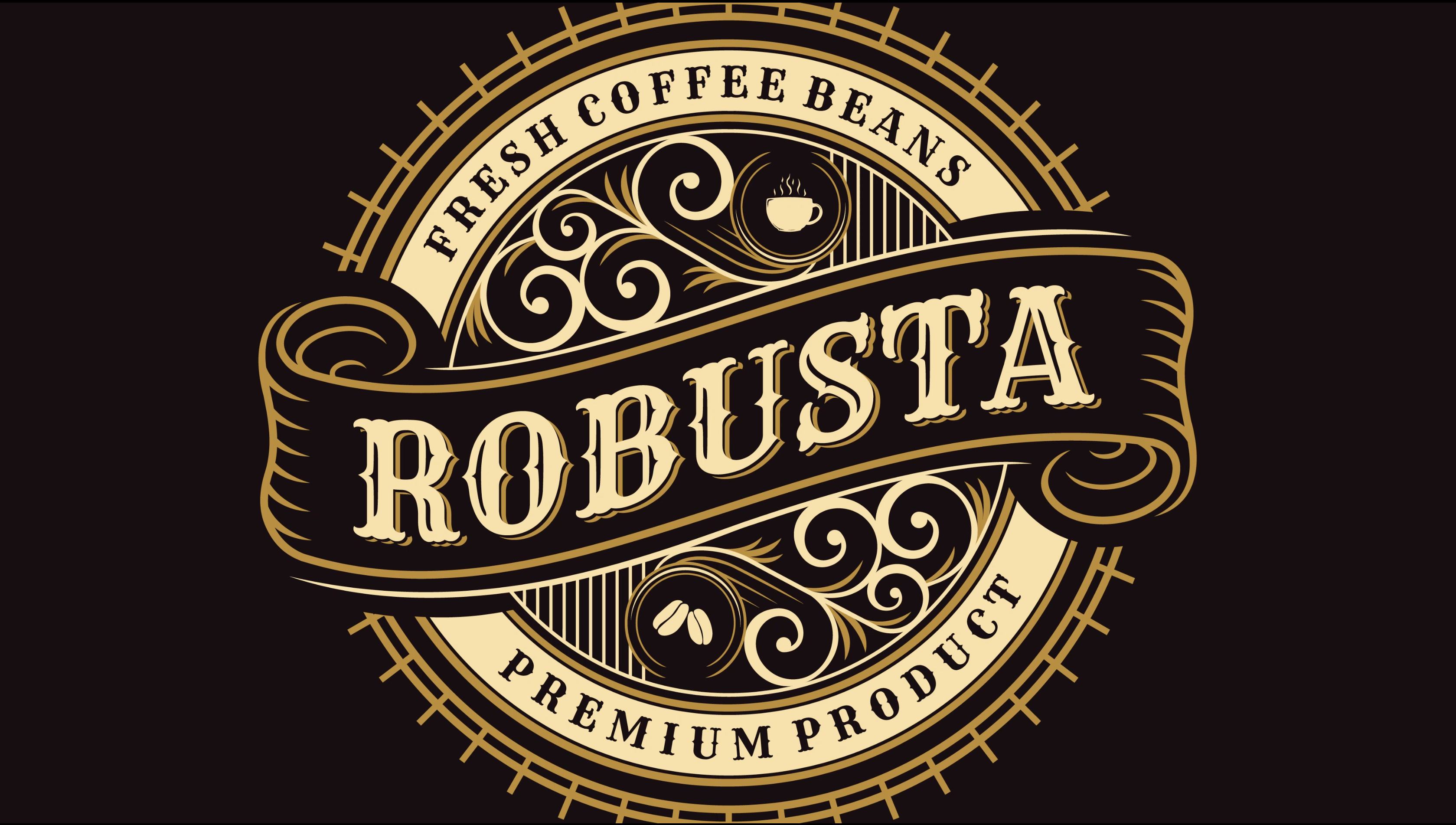 A capstone client project to create a 30-second commercial using provided footage to inspire audience to engage with the brand.

Using the provided footage and imagery, a storyboard was created to layout the feel and direction of the brand.

The idea that with a name like Robusta, the coffee company's name mirrored that of superheroes, the commercial quickly flourished into creation. Designing the commercial in a time when Marvel movies were abound and Avengers: Endgame premiered earlier that year, it was only natural to gravitate toward the adrenaline boosting, epic feel that comes over you when a Marvel trailer is released. Mirroring the classic, Fade to Black and blaring horn combination Marvel employs, this commercial is an homage to coffee as the hero of our everyday lives. 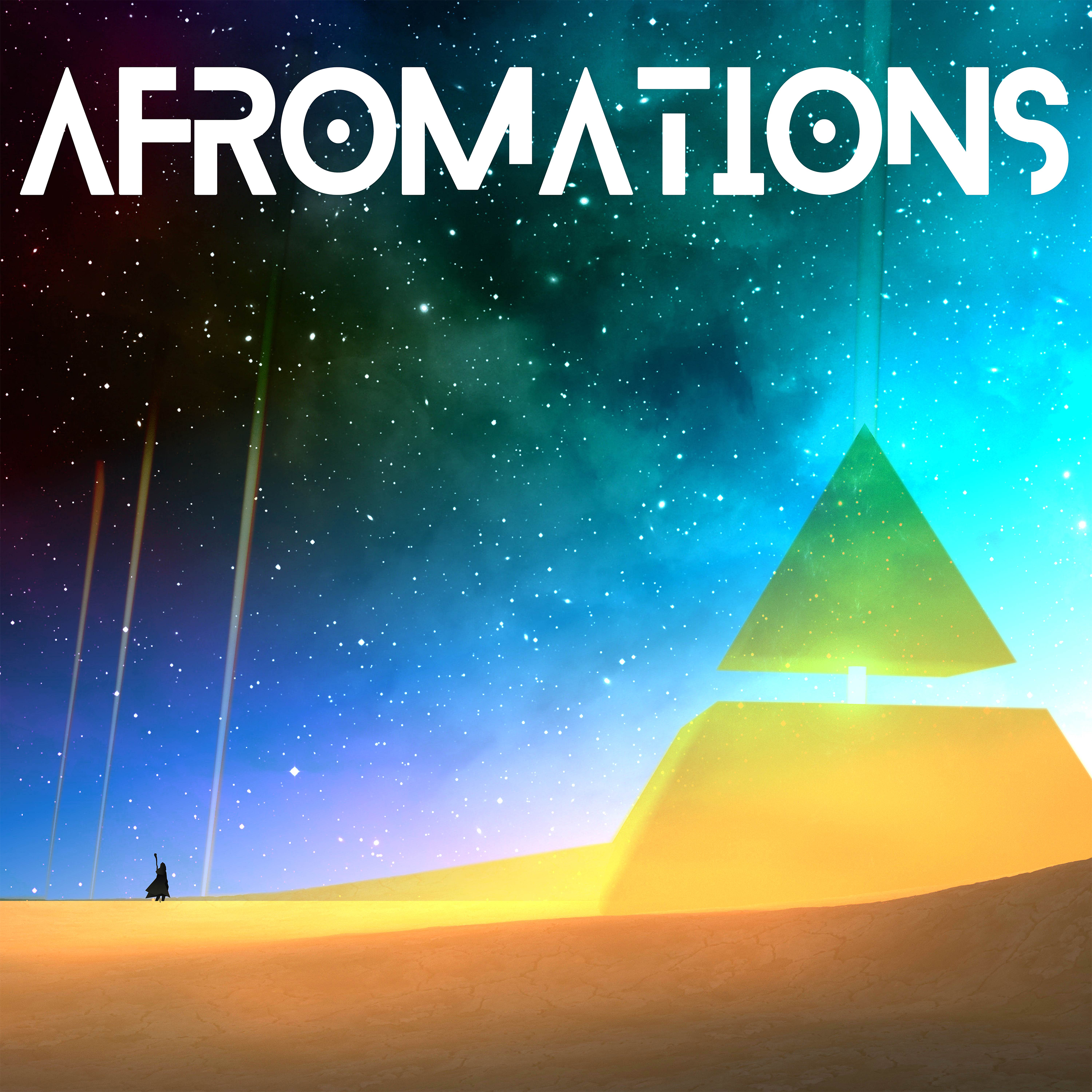 This cover art project stemmed from Q. Cole’s EP Afromations. He described wanting to create a sound that “affirms Blackness and takes someone on a journey to self-awareness and love”. In a time where Black people are fighting for respect, Q. Cole wanted to create an album that brings listeners to the future of self-awareness without forgetting where they’ve come from.

Using Adobe Illustrator and Photoshop, the design evolved into an Afrofuturistic representation of the pyramids awakening and rising into the heavens. The work speaks to the journey of a lone traveler searching for their place in a world with so many uncertainties. Through this journey, the traveler not only awakens their own spirit, but the power that lies within the Earth. It brings about the arising of the pyramid and challenges our thinking of what awaits us when we harness our true potential.

Within the first few hours of its release, Afromations had over 100 listens on Band Camp and has reached followers as far as the Netherlands on Spotify. Q. Cole’s genre-bending style creates fans across the globe and helps connect us in a time when we need human connection the most. 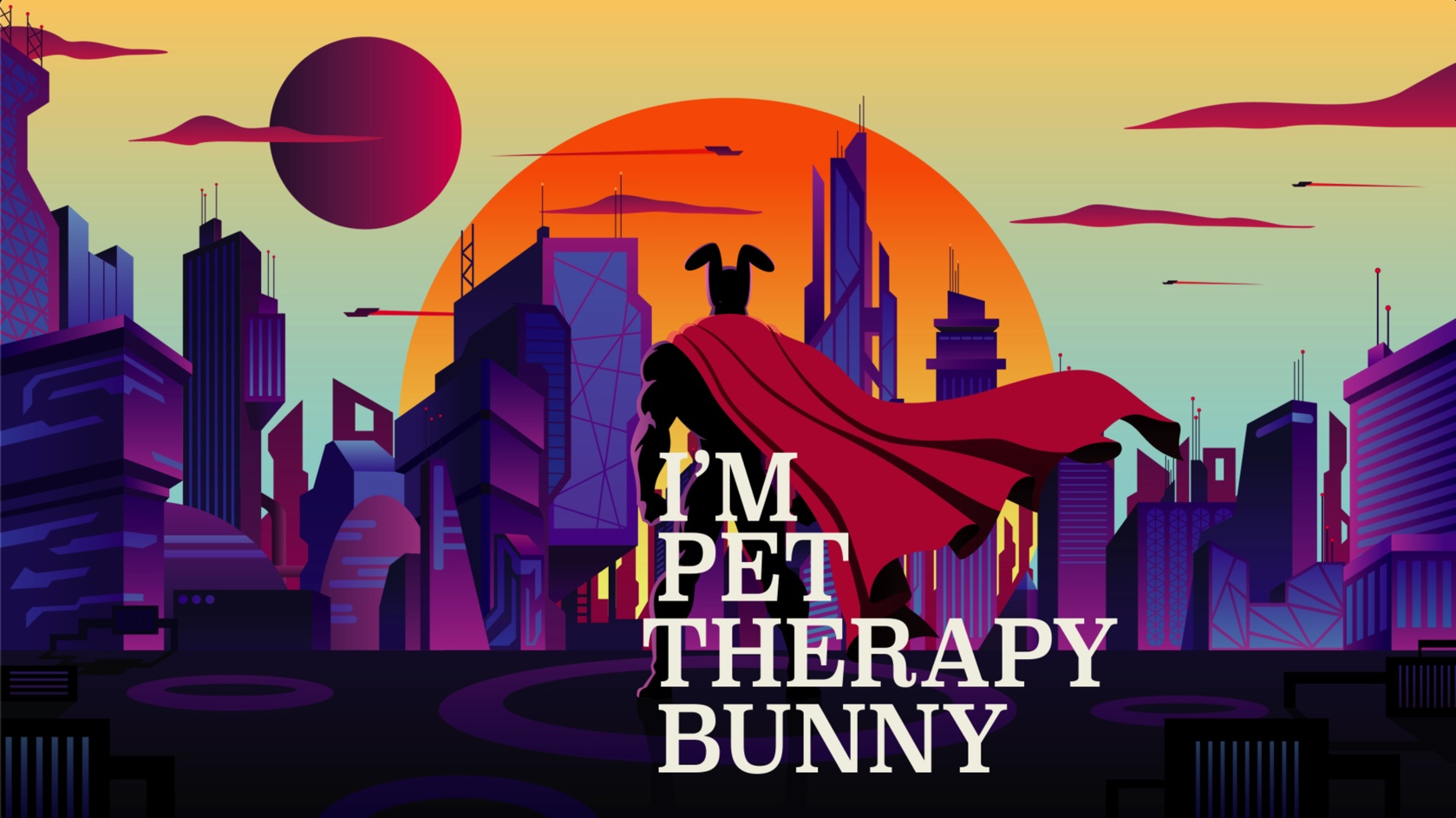 The Pet Therapy Bunny kinetic typography project was created as an imagining of how Pet Partners, an animal-assisted therapy non-profit organization, could reach new recruits and donors. If this were a real ad for Pet Partners, the design personalizes the story and creates the central character “Pet Therapy Bunny”, making it memorable and aiding recall through visual elements that support the narration. Lighthearted and engaging, the story of the Pet Therapy Bunny can inspire a donor to help fund the dreams of other pets or encourage a new recruit to sign up to create their own pet therapy team with Pet Partners.

The storyboard was crucial to lining up the flow of Pet Therapy Bunny's story. Introducing the character and finding a way for the audience to be drawn into what this bunny is up to helps build a connection. As they quickly find out, the narrating bunny is a superhero who takes pride in helping others. While it may not be a real superhero, Pet Therapy Bunny's story brings a smile to the viewer's face as they imagine how important the bunny feels in its role. Adobe After Effects provided the perfect basis for animating text and transitioning through Pet Therapy Bunny's narration. 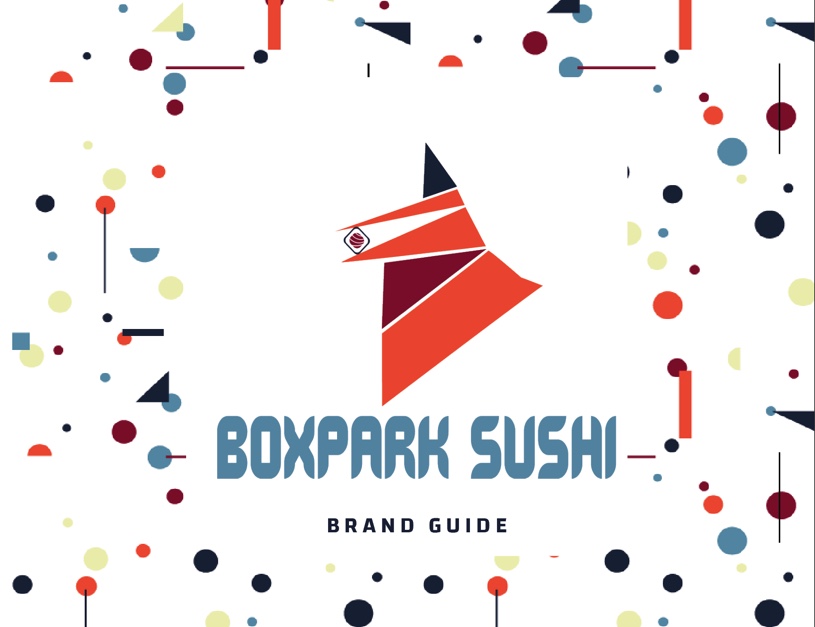 BoxPark Sushi is a fictional restaurant concept developed for a Capstone client. There were three criteria: 1. It needed to be a sushi restaurant named BoxPark Sushi, 2. It would be housed inside of a shipping container, and 3. It would be “located” in East Side Milwaukee. The only other requirement was the media package needed to include a design for a sign, pole banners, and a bumper sticker/magnet. It was inspired by the London-based BoxPark franchise which aims to further the innovations of social dining and shopping. As such, BoxPark Sushi characteristically was designed with the intention to open inside a shipping container combining elements of traditional, minimalistic Japanese culture and Abstract Expressionism in the dining experience. The hope for BoxPark Sushi was to connect diverse cultures and people in East Side Milwaukee with a genuine sushi experience that would introduce many to the artistry of sushi.

With the above information in mind, a design brief was created to document the evolution of BoxPark Sushi’s mission and vision. Creating an atmosphere where consumers felt as though they were being transported to Japan was at the core of the restaurant’s concept. Second to this was the inviting nature BoxPark Sushi wished to create for beginner sushi eaters and skeptics. Developing a modern take on the traditional sushi restaurant was another way to draw in East Milwaukeeans.

To define BoxPark Sushi's visual and digital personality, the creative brief was developed using information gathered about East Side Milwaukee. This was used to define the target audience, the unique selling position (USP) as the only restaurant in Milwaukee with a membership club and cooking classes, and highlight the demographics and psychographics of consumers. As the foundation of the BoxPark Sushi's image, the static vision board introduces the client to the design idea at the beginning of the project. The selections made identify the focus on nature, traditional Japanese locations, and relationships. Creating the vision board allows the designer and client to work together to build the identity and stay on the same page before getting too deep into the project.

Starting with a mind map, I quickly fell down the rabbit hole of keywords like sushi, Japan, culture and food. The origin and early history of sushi led to an anecdote about a folktale of a woman who hid her rice in a bird’s nest and how it began to ferment and mix with the fish from the bird’s meal. Folktales are so deeply engrained in Japanese culture that they are taught in Japanese culture and language courses. Most tales focus on greed and obedience, so the next step of the process was to research Japanese folktales about food. This introduced Inari (or Onari), the Shinto deity represented as both male or female and is associated with rice, love, fertility, and prosperity. Inari is often accompanied by their companion, the kitsune, or fox spirit.

Once I exhausted the mind map exercise, I moved into sketching versions of the potential logo. Over 20 versions were created to provide as many options to present for critique. After reviewing each of the submitted possibilities, I was able to narrow my focus on version #6, #9, and #13 from the original sketches below. The chosen sketches focused heavily on the kitsune, or fox spirit, as a representation of the restaurant's identity because of the constant presence of the kitsune with the deity Inari/Onari. Using these as a foundation for exploration, I revised the sketches to more clearly present the spirit of BoxPark Sushi.

Research showed that the Shinto religion is still one of the most practiced in Japan and dates back to early writings in the country. The integral part the Shinto faith appears in the daily lives of Japan culture and can be seen not only in their numerous shrines to Inari/Onari around the country, but also in the many festivals that take place throughout the year. Using the kitsune, whose statues are seen all over the country guarding the shrines of Inari/Onari, aligned with BoxPark Sushi's intention to honor the Japanese culture (and also sends up a request that the kitsune guard BoxPark Sushi, as well).

BoxPark Sushi’s focus on being genuine, social, inviting, and daring can be seen throughout the design of the brand’s identity and assets. From the bright and engaging color palette, the bold design of the logo icon, to the focus on the inspiration for the icon, the brand highlights being daring and social while also grounding itself in Japanese traditions. Incorporating Japanese minimalism in the design of the icon and the brand’s approach to sushi are important aspects of BoxPark Sushi and highlights how the brand’s identity appropriately speaks to the attributes.

The brand guide is the cumulative representative of BoxPark Sushi's strategies, guidelines for the logo, as well as examples of the voice and tone. With this information, future designers can come in and update the package, as needed. Change is the only constant and brands must always be prepared to change or rebrand. The guide was created using an art gallery theme of an Abstract Expressionist exhibit. This fun direction keeps the information fresh and engaging while also making it easy to recall. Check out the animated version of the brand guide HERE!

The use of the t-shirt, reusable carryout boxes and bags, as well as the BoxPark Sushi app, are all effective ways to communicate the brand to the target audience. Making the carryout boxes and bags reusable will encourage customers to not only use them to-go but also encourage continued use in their everyday lives. In addition, the unique pattern and color scheme is sure to draw the attention of anyone who sees the bag or box. Without even having to ask where the person got it, the viewer will see BoxPark Sushi’s name prominently displayed which increases visibility and interest. Placing the icon on the front bottom left of the shirt is intended to give the appearance the customer has ingested the icon’s sushi roll. This unorthodox placement will attract customers who like wearing novelty tees and will be a conversation piece for many, again, creating more visibility. Lastly, the app is used for more than just ordering lunch on-the-go. It makes keeping track of reservations, club membership, and cooking class registration easy for customers to access. The app will also allow for quicker access to restaurant operating hours for holidays or unforeseen circumstances occurring outside of normal hours without having to call the restaurant. It will be another form of communication between BoxPark Sushi and its customers, increasing the social aspect of the brand.​​​​

After an initial questionnaire was sent out, 51 respondents (average age range from 25-34) commented on the final version of BoxPark Sushi's brand strategy. Responses were positive, with 59% identifying they would likely try BoxPark Sushi based on the main door sign and the pole banners, alone. The top four descriptors of the color palette were: Interesting (59%), Eccentric (45%), Upbeat (33%), Friendly (33%). The assets were also rated favorably with 90% of respondents identifying having an app would encourage them to try BoxPark Sushi and 88% identifying the carryout box and bag as motivation to research BoxPark Sushi. Cumulatively, 92% of respondents believe the logo, assets, and brand personality were cohesive throughout the guide. The informative infographic shows the main takeaways from the questionnaire regarding the brand's identity.

Thank you! Your submission has been received!

Oops! Something went wrong while submitting the form :(